Author of PC, M.D. How Political Correctness is Corrupting Medicine 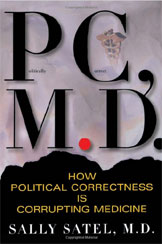 PC Medicine-Hazardous To Your Health

WHAT MAKES US SICK? Poison chemicals, viruses, smoking. These and hundreds of other things. But what about modern medicine itself?

More and more, social activists, scholars and even health professionals are telling us that the culture of medicine is to blame for many illnesses. No, they are not talking about health insurance woes, fifteen-minute office visits or medical mistakes. Here is what the critics are up to:

The common theme here is the health profession’s failure to make the connection between oppression—by society at large or by the medical establishment itself—and illness. It would be one thing if this were just a dry academic debate with no real-life consequences. But it isn’t. The critics are beginning to fashion a world of politically correct medicine. I began to worry about this in 1995 when I learned that some of my fellow psychiatrists at a San Francisco hospital were grouping inpatients according to race and sexual orientation so that they could organize treatment around psychological needs that were supposedly peculiar to those groups.

This book shows what PC medicine looks like and how the very efforts to correct perceived problems are making some people sick, or sicker than they need to be. I begin in chapter 1 by examining the philosophy of PC medicine where it is most forcefully articulated, in the schools of public health. A former dean of the Harvard School of Public Health has described his institution as “a school of justice.”[2] Indeed, it is true that society’s sickest people tend also to be among its poorest and most disenfranchised, but many public health experts see their mission literally as attacking the conditions that lead to poverty and alienation in the first place. “The practice of public health,” says Brown University’s Sally Zierler, “is the process of redesigning society.”[3] On the assumption that social conditions are the primary reason for ill health, she and her colleagues urge the redistribution of wealth to ensure the even distribution of health.

These political remedies may appeal to some—and to be sure, the relation between health and social status is not a trivial one—but what happens when a clinical enterprise like public health takes on the grandiose mission of “redesigning society”? For one thing, taking responsibility for one’s own health comes to be virtually ignored. After all, if AIDS is a “biological expression of inequality,” as Sally Zierler has put it, we can’t hold people accountable if they place themselves at risk for contracting HIV, the virus that causes the disease. Indeed, we must understand that using a condom is hardly a priority for those who are “seeking sanctuary from racial hatred through sexual connection” as Zierler claims.[4] In this worldview, public health experts who want to fight the AIDS epidemic should be promoting social and economic justice, not self-care. Doctors like me, on the other hand, who expect their addicted patients to stop using drugs and to start using condoms—and if all else fails, to use clean needles—are accused of blaming the victim.

In the course of expanding the purview of public health to encompass the quest for social justice, the academic elite are warping the indispensable mission of their profession: the practical, here-and-now prevention of injury and disease. This is what we need and expect from public health. It is not equipped to fight widespread injustice and cannot squander on a utopian vision the energy and resources needed to prevent and combat the chronic diseases and disabilities from which Americans are suffering.

In PC medicine the quest for social justice can be mounted on any level, from academic campaigns to grassroots activism. Chapter 2 is about the reforms demanded by a group of people who call themselves “the last minority”—former psychiatric patients who once used or “consumed” mental health services and now say they have “survived” them. Claiming that the system has abused them, these “consumer-survivors” compare themselves to the civil rights warriors of the 1960s. Many revile medication and fight against public policies that make sure psychotic patients take antipsychotic drugs and, when necessary, hospitalize them against their will. Consumer-survivors want nothing less than control of the mental health system.

In Chapter 3 nurses are the ones who claim they are oppressed. To be sure, most nurses are dedicated to their jobs, suffer from serious staffing shortages and are worked to the bone. But a sizable fraction of them are disgruntled by what they perceive as a male-dominated system. Their misguided efforts to distance themselves from the medical “patriarchy” have led to a proliferation of fad therapies and a dumbing-down of nursing education—trends that can translate directly into botched diagnoses and care in medical centers and emergency rooms.

In Chapter 4 we again see women who claim mistreatment at the hands of a male-oriented society. These are the activists behind the modern women’s health movement, and as we will see, their complaints about receiving insufficient attention from the medical research and health care establishments have little basis in fact. It is not at all clear that the women’s health advocates of today—unlike their feisty sisters from the 1960s and 1970s who brought us a welcome breath of fresh air in Our Bodies, Ourselves—can fairly point to sexism as a problem.

Chapter 5 takes us to South Carolina and the problems associated with crack-addicted women having babies. I tell the story of the quest for “social justice” for these women—that is, the lawyer-mounted campaign for their freedom to use cocaine during pregnancy—a crusade that has trampled on the best clinical interests of their newborns and of the mothers themselves. South Carolina was a flashpoint for this drama because it is the only state where a viable fetus is considered a person; as a result, when these mothers take drugs during the third trimester, they are technically committing child abuse. As other states grapple with the rights of late-term fetuses, what happened in South Carolina will prove a riveting cautionary tale.

From South Carolina we return in Chapter 6 to Washington, D.C., where the federal government is trying to close the so-called health gap. While no one disputes the fact that minorities, especially black Americans, tend to be less healthy than whites, it is rash to ascribe this difference mainly to bias in the health care system or to doctors’ subtle prejudice against minority patients. There are ample reasons for differences in health status—some easier to address than others—but the evidence does not support the charge of bias. The accusation is nonetheless being made by influential groups ranging from the U.S. Commission on Civil Rights to the Association of American Medical Colleges and by black leaders like the Reverend Al Sharpton. As if this rhetoric weren’t divisive enough, some of the remedies being implemented are deeply worrisome.

The final chapter explores the strange new world of psychotherapy for victims. One aspect of this is “multicultural counseling,” a practice strongly supported by the American Counseling Association. Multicultural counselors presume that nonwhite patients’ personal difficulties largely stem from their efforts to adjust to a racist society. By urging patients to find only external sources for their discontent, multicultural counseling makes a mockery of self-exploration—the true purpose of therapy—and self-determination.

Most Americans are familiar with three eras of public health—the sanitation, biological and lifestyle eras. The first of these, the sanitation era, began in the mid-1800s and focused on the control of such contagious diseases as typhoid, tuberculosis and yellow fever. It ushered in developments like water purification, refuse disposal and extermination of disease-carrying pests. The late 1800s marked the start of the biological era, when the bacteria that cause specific diseases could actually be seen under the microscope. The first half of the twentieth century brought antibiotics, vaccines and pasteurization, and with them a series of rapid victories against devastating diseases such as polio, smallpox and diphtheria. The 1970s brought the lifestyle era, marked by campaigns against preventable injury and chronic illness. The surgeon general took the lead in urging Americans to stop smoking, reduce alcohol use, exercise more, eat less fat, use seat belts and wear bicycle helmets.

Over the last 150 years, millions of lives have been saved, improved, and extended by the public health efforts of these three eras. Through the honest application of science, education and a focus on personal responsibility, public health professionals have kept lethal elements from invading our bodies and helped us define the part we can play in preserving our own health.

So sweeping were the transformations in America’s health during these eras that they are properly called revolutions. Now, at the turn of the twenty-first century, a fourth era, politically correct medicine, is emerging, powered by the idea that injustice produces disease and political empowerment is the cure. In stark contrast to the three revolutions that preceded it, the fourth “revolution” is counterfeit.

Though the activists appear to be waging “the good fight” for better health through social justice, their actions do not prevent disease, treat symptoms or perfect clinical methods. At best, they create distractions and waste money; at worst, they interfere with effective treatment. Although the activists themselves may end up feeling better, gratified to have taken part in the struggle for social justice, they undermine the Hippocratic ideal: thepatient comes first.

My goal is not to defend the status quo. There are many pressing problems, including how to deliver health care to everyone affordably. But it is critical to understand that injecting social justice into the mission of medicine diverts attention and resources from the effort to find ways of making everyone, regardless of race or sex, better off.

How did the activists—I call them “indoctrinologists,” since their prescriptions for cure are ideology and social reform—manage to gain their foothold? One way is simple momentum. For several decades the universities, the law profession and the workplace have been under assault by people claiming oppression of one sort or another. It’s almost surprising that medicine has been immune for so long. Another way is that the indoctrinologists’ objectives play into a well-earned sense of guilt that hangs over the medical profession. Psychiatry, for example, has its skeletons in the closet, such as the dismal back wards of state mental hospitals. The reputation of the U.S. Public Health Service still smarts from the notorious Tuskegee Syphilis Study. Not too long ago women were expected to submit, without question, to radical mastectomies and hysterectomies simply because the (male) doctor recommended them.

Finally, PC medicine has flourished because too few people have been paying attention. While the nation has been preoccupied with headline-grabbing subjects such as HMOs, Medicare coverage and the millions of uninsured Americans—all pressing issues indeed—the indoctrinologists have swooped in under the radar. While it is improbable that this activist cohort of public health professors will ever spark public leaders and politicians into enacting the massive social reforms they dream of—in short, to equalize the health status of all Americans by redistributing wealth—their animating spirit is being felt in a number of clinical domains. Their efforts to administer PC medicine, as we will see, are gaining momentum, and their prescriptions will be hazardous to our health.